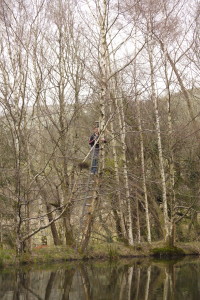 I’m a town girl.  Like a bit of bird spotting but never really seen bats before apart from a couple of times when staying in the far north of Scotland but we have them here at Gwalia.  On warm evenings just as dusk falls you are sure to see them.  They are really quite mesmerising.  The first you see of them is a quick shadowy flash and you wonder if that was just a fast flying blackbird but by the second glance you know you’ve seen a bat.  They have a very distinct flight and they move so quickly as they dart around finding insects.

I’ve become a bit obsessed by bats lately.  For Christmas I got a bat identification chart, a bat book and best of all a bat detector.  It’s a listening device which tunes in to the bat’s frequency and helps you to identify  the type of bat.  Unfortunately it’s really quite difficult as there are several common types on similar frequencies but even just hearing the is quite a thrill.

Amy’s put up some bat boxes over by the pond as they like to nest near water so we’re hoping for some more glimpses once the summer comes.