The wood fired hot tub is one of the main features of the new cabin which will hopefully add that bit extra when people are choosing where go on the their short break.  We’ve also been looking forward to a dip in it as well but first we had to get it off the lorry, over the field, over the stream, over the style and onto the new decking.  Not so easy when the whole thing weighs in a 190kg!  We disassembled what we could, found several strips of old carpet, tipped it on its side and then rolled.  It was quite a sight but luckily the chunky wooden tub is so substantial that we all survived in tact, despite early fears of an Indiana Jones, Temple of Doom scenario. 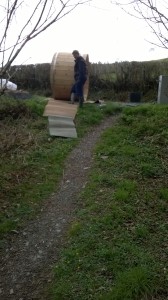 Once in place we quickly got it reassembled and it was all ready for filling.   Harry had helped us out with getting a fresh water supply by tapping into the spring source 50m away and so we quickly got filling the tub with beautifully clean and clear water straight from the ground.  The tub holds 1300 litres so after 2 hours we were all ready to light the flames.  It’s quite a brilliant design whereby the metal stove sits inside the wooden hot tub but is surrounded by a wooden gate so that once you’re inside it you can’t burn yourself on the stove.  The wood is fed in from the top and then once you surround the stove in water it all starts hotting up.

Lesson one is don’t leave the stove unattended.  We nipped away for some dinner and when we got back 45 minutes later the fire was nearly out.  Nonetheless, the floating thermometer was rising and once re-lit it soon got up to temperature.  The moon was really bright, the stars were out and the beers and wine were loaded into the handy drinks holder.  A quick strip off in the cold night air and we were in! 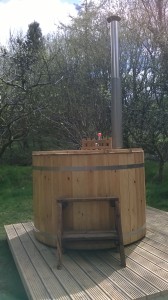 Oh, it was sooo heavenly!  The water was so warm and soothing, it was like having a romantic bath but we both actually had room to move around!   We’ve spent so much time out by the lake getting the cabin ready but it was such a different experience at night.  There was a full moon and the sky was a bit cloudy so it made the moonlight seem all the brighter as it bounced off the clouds.  Unlike having a bath the water stays nice and hot as the heat from the stove keeps releasing slowly.  We ended up being in for at least an hour and a half.  I was nervous about being cold when we got out but the hot tub was so warm that we were actually still super warm whilst towelling down on the decking.   I kind of always thought that hot tubs were one of those things that other people raved about but were probably over-rated but I have to say I absolutely loved it.  Peaceful night air, moon and stars, glass of wine…romantic perfection!