(not THE otter!) photo Catherine Trigg

Gwalia is less than 3 miles from the famous River Dyfi. The eco-system of the Dyfi Valley is so significant that it has been granted UNESCO World Biosphere Reserve status. This has helped local people protect the landscape and to preserve and study the many species which live within it.

Otters are one of those rare and wonderful creatures which has set up home on the Dyfi. They are such a treat for those who manage to catch a glimpse but are famously elusive for those actually trying to find them. A local wildlife expert had told us that otters regularly patrol all the streams and tributaries to the Dyfi and one of these cuts through the heart of Gwalia so of course, there was always the chance that they were around.

It was early one morning in January when it all happened. 7:45am and all was quiet. Amy’s Mum was up and about earlier than normal and was outside doing her usual morning chores whilst Amy and I were where we usually are before 8 o’clock, in bed. We heard a shout come from outside and thought Livy had fallen but no, what she was shouting was “OTTERS!”.

Amy darted out first whilst I was still throwing some clothes on and grabbing my phone in case I could get a photo. Two otters were in the garden pond, not the stream or lake but the tiny little pond 3 meters away from the house! Amy’s arrival had startled them and they’d legged it, so by the time I got there they were both gone. Completely disappeared. I was gutted! All that remained was a half eaten frog.

There were no guests in the Cabin that morning so with very little optimism I headed over to the cabin lake just in case they were there. In my mind of course I thought I’d see them splashing around but when I got there all I could see were the rain drops splashing on the surface of the water. With heavy heart I headed back to the house.

But then…out of the corner of my eye…there it was. An otter. An actual otter. It was busy exploring the pools in the stream which runs immediately behind the cabin. We’ve been lucky enough to see otters several times in the Highlands but never this close. It was beautiful. Luckily I had my phone on me and called back to the house to get Amy and Livy over whilst I quietly shadowed it working it’s way up the stream.

The three of us stood in silent awe, watching this magnificent animal, no more than 5 metres away. It looked at us as it munched it’s way through breakfast. The otter just didn’t care that we were there. We kept a respectful distance and in return it let us into it’s world for just a couple of minutes, completely unperturbed by our presence.

The second otter was nowhere to be seen and after gracing us with it’s presence on dry land the otter ducked under water again and completely disappeared. The dull light of a winter’s dawn meant that I couldn’t get a photo but it didn’t matter. It was a magical moment which will stay with us all forever.

Sarah and Lee came to stay in early March and Sarah wrote this wonderful poem, we were absolutely delighted to receive it. It makes me smile every time I read it. It feels like she captured everything we hope that our guests enjoy about staying in the Cabin. She agreed to let us put it here for all to enjoy!

There’s a photo of Sarah at the top lake enjoying the wintry weather. 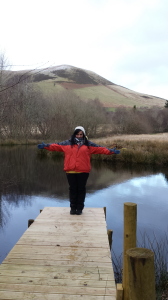 Gwalia Cabin Cake
(The recipe for a slice of heaven!)

In the middle of nowhere, off the
beaten track is a little slice of heaven,
the Gwalia Farm wooden shack.
Tucked away amongst the hills and the
Silver birch, you can watch the clouds
roll by and listen to the birds that perch.
As they serenade you, the winds melody as
the strings, you become enchanted with the
echo from the springs.
Leave behind the daily grind and pack it
all away, forget about the mundane things
as the night closes in on the day.
Sit and breathe the cool crisp air and
watch the water ripple, enjoy the moons
pale spotlight with your favourite tipple.
Unwind inside this haven as the fire crackles
and sends out an amber glow, you wont want
to burst this bubble to pack your things and go.
When you wake in the morn there’s a drizzle of
snow on the lake, just like a fine mist of
icing sugar dusted onto a cake.
Looking out to the banks with their thick
mossy rug, you sit on the porch with a
steaming hot mug, you think about this
glorious view and now you have a reason,
you must return to see it’s wonder
in the summer season!

I’m a town girl.  Like a bit of bird spotting but never really seen bats before apart from a couple of times when staying in the far north of Scotland but we have them here at Gwalia.  On warm evenings just as dusk falls you are sure to see them.  They are really quite mesmerising.  The first you see of them is a quick shadowy flash and you wonder if that was just a fast flying blackbird but by the second glance you know you’ve seen a bat.  They have a very distinct flight and they move so quickly as they dart around finding insects.

I’ve become a bit obsessed by bats lately.  For Christmas I got a bat identification chart, a bat book and best of all a bat detector.  It’s a listening device which tunes in to the bat’s frequency and helps you to identify  the type of bat.  Unfortunately it’s really quite difficult as there are several common types on similar frequencies but even just hearing the is quite a thrill.

Amy’s put up some bat boxes over by the pond as they like to nest near water so we’re hoping for some more glimpses once the summer comes.

[singlepic id=39 h=200 float=left]Wildlife is an important part of Gwalia and we try to be as encouraging and respectful of nature as possible.  There is a badger set here, bats live in the woods, an otter has been spotted and many different types of birds regularly feed on the bird table and nest nearby.  The ponds also host a fantastic range of species.  Of particular note is the dragon-flies which get counted annually by a local  research team as part of their on-going ecological studies. END_OF_DOCUMENT_TOKEN_TO_BE_REPLACED